The Trump Acquittal: a Reshaped USA

How the president’s impeachment win has divided a nation, and a school 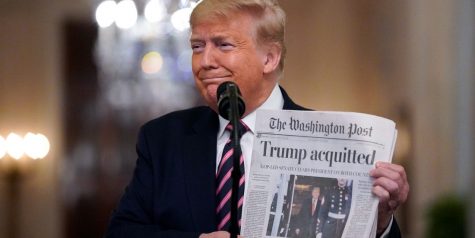 Two weeks ago, the US Senate voted to acquit President Trump of crimes involving the confirmed request for dirt on Joe Biden from Ukraine. Unless you’ve been living under a rock for the past few months, you should know that that’s significant. The fallout from the acquittal has yet to be seen in full, but effects are already being felt. As to how this could impact the 2020 election remains to be seen, but voter reactions might determine it sooner.

From investigations into his dealings with Russia to his unproduced tax returns, the Democrats have been working tirelessly to unveil the truth behind the 45th POTUS. And it seemed like they had finally found a case that stuck, or at least, merited impeachment. What set Ukraine apart from the other investigations and claims was solid evidence of rotten dealings; a transcript released by the president himself that blatantly showed his request for Biden info from the Ukrainian president. Democrats called it incriminating; Republicans call the whole process a sham of unconstitutional proportions. But what do local high school students have to say about it?

When asked how they felt about the outcome of impeachment and acquittal as a future voter, students from different ends of the political spectrum stepped forward to voice their opinions.

“(I’m) frustrated honestly, because no matter what happens with Trump the Republicans will always vote for him,” says Grace Roti (11) of Fairfax High School. “And I’m young, I can’t vote in the next election, so I have to sit back and watch.”

Democrats have a right to that frustration. It’s the frustration of having true evidence, evidence practically confirmed by the president himself, only to see it rebuked by a seemingly ultra-partisan senate majority.

When asked the same question, an anonymous Republican student said, “I am angry at the Democrats for putting the country through this impeachment hoax. I am happy that the Democrat investigation showed what a corrupt family Joe Biden is a part of. I’m also excited for Trump’s re-election.”

Perhaps the Republicans have something to celebrate as well. After all, is someone evil if their party scored a “victory” over the other viewpoint? Too often are politics associated with winning and losing being the two options, when in fact we pay politicians to run the nation well, not to their personal liking. But if I were a Republican, I’d be happy too. This is a victory lap of sorts, before the madness of the 2020 election is upon them.

One thing is for sure; both sides sound set in their own beliefs, which is understandable. This is just a glimpse into the larger debate tearing yet another rift into the already fragile state of American democracy. For every Democrat calling Trump a traitor, there’s a Republican to support him; his approval polls reflect as much. What’s important is keeping that same divide from tearing the nation completely in half. There’s no denying the fallout impeachment is going to have, both on the 2020 election and presidencies down the line, but these are still the issues of one nation. Divided though we may be in our beliefs, the biggest takeaway from impeachment and acquittal is that we are still one people under one flag.

That fact is greater, by far, than whoever’s waving said flag with more patriotism.