The Phenomenon of Tiger King

New documentary sparks controversy and a massive audience with its release 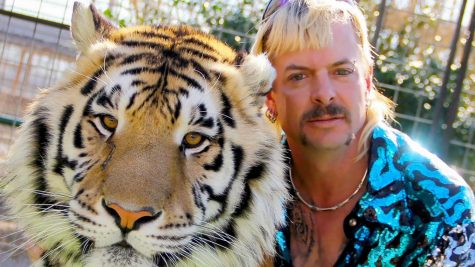 How does the average teen fill the days of quarantine that seem to blend together into one? Do they spend all their time behind a desk, prepping for their online exams? Do they choose to spend rainy days immersed in a good book, perhaps?

No. They wake up, stretch, and reach for the first device they can find. They text their friends, FaceTime their significant others, or spend hours on a mobile game (Animal Crossing has become increasingly popular). Or sometimes, they open their laptops, settle back in the sheets, and watch Netflix. Or more specifically, Tiger King, the new Netflix documentary that has the entire quarantined nation talking.

Tiger King follows the story of Joe Exotic, a big cat owner from Oklahoma. Exotic’s story is truly captivating, as he spars off with both the law and animal rights activists to retain control of his tiger zoo. From murder to animal abuse, from drugs to jail, Joe Exotic’s story is the perfect tale for a desperate world to binge watch. The documentary has already gained a massive audience of 64 million households worldwide in its first month on the streaming service, prompting countless online trends, memes, and TikTok videos to build on the show’s immediate success. The real question is, however; is Tiger King a truly good documentary, or a brain-candy binge show for the American public to indulge in while the world goes mad around them?

“I think it’s like one of the crazy shows you’d watch with your dad on the discovery channel like Duck Dynasty and Finding Bigfoot, like it’s so weird it’s good,” says Emily Lamb (12). “It’s probably just because it’s new, like pretty much every new show has become popular [in this time].”

Lamb might have a valid point, but the ratings tell their own story. With an 86% rating from audiences and a 85% rating from critics on Rotten Tomatoes, Tiger King has not only become a smash hit, but has ascertained a spot among the genuinely entertaining titles on Netflix in its short time in the limelight. Quarantine has simply driven more viewers to watch it, more, certainly, than might have watched the documentary under different circumstances.

If the timing of Tiger King’s release was an intentional marketing ploy by Netflix, a way for the company to make the most of the bad situation the world currently finds itself in, then it is indeed a genius move. While movie theaters close their doors and summer blockbusters get pushed, one by one, to next year, the age of streaming services has never been stronger. It’s the ideal environment for a show like Tiger King to prosper, and quarantined audiences are ready and willing to snap up whatever bingeable content they can get their hands on.

One thing is certain; so long as the world has nothing else to do, a show about senseless rednecks, wild animal trainers, and messy crime will suffice to keep us all entertained.