Questioning ‘Out of Shadows’

A Deep Dive into an Exposé Documentary 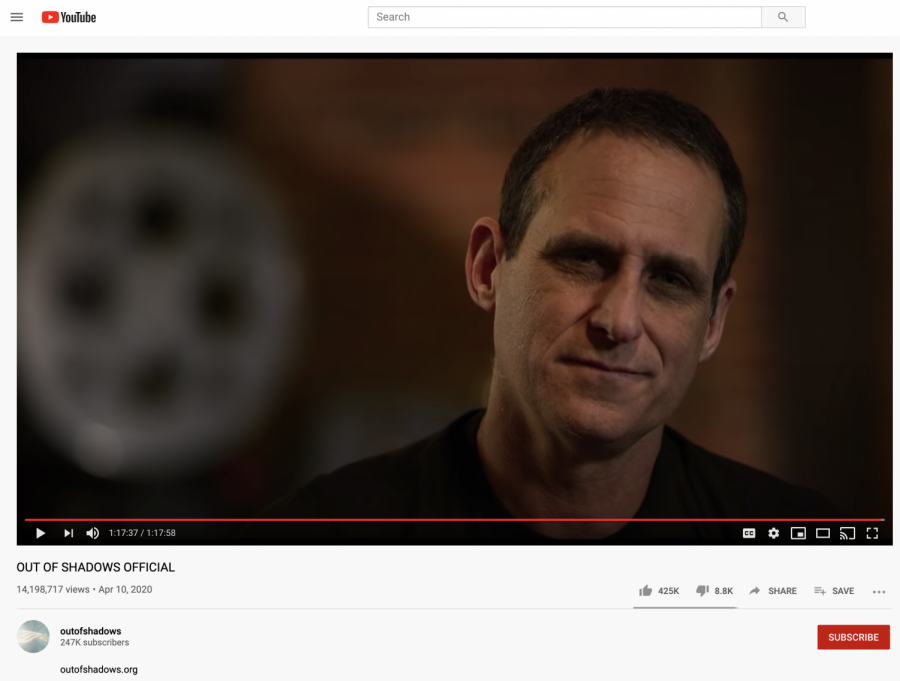 Out of Shadows, a documentary on Youtube, released in April 2020 has sparked some conversation about the integrity and influence of media consumption on Americans. Personally, I’ve heard from many peers about their trust in this information and eye-opening experience this documentary has given them. For me, that scares me. I’m here to warn about the same dangers presented in this documentary that the documentary warns about mainstream media.

The documentary, according to the description in the video, “lifts the mask on how the mainstream media & Hollywood manipulate & control the masses by spreading propaganda throughout their content,” followed by a rather dramatic explanation that their goal is to “wake up the public.” It is important to note, there is no information listed in the video or on the official website, outofshadows.org, about the credentials or even the names of the creators of this documentary.

The documentary makes many strong claims, but it lacks strong evidence to support the claims and is filled with contradicting and questionable content along with misinformation and false connections. Transitions between the topics are poorly executed and the content itself is unorganized jumping from topics constantly throughout the documentary.

My explanation of the documentary is likely insufficient for your understanding of the film, so if you actually do watch it, but please watch it with a critical eye.

The beginning asks a series of rhetorical questions including “What if this entertainment was more than entertainment? Do you ever stop for a second and question the content? What if the people controlling our content didn’t have our best interests in mind? Whose influencing our content?” The opening monologue is spoken by Mike Smith, a former stunt performer that suffered a career-ending lower back injury. Smith is never formally introduced and his full name can only be seen briefly through a screengrab of a film chair, however, he is later referred to as Mike through an anonymous interview with a pelvic floor therapist that worked with Smith after his injury and seemingly sparked Smith’s “awakening.” Smith’s account of what the anonymous therapist told him was that she was one of the only pelvic floor therapists in Southern California at the time so “when these satanic people and these evil people do their little rituals to little girls and women and boys, who do you think puts them back together? I do. It’s[the spiritual world] completely real and you need to look into it.” Why would non-stunt-performing actors and producers, referenced as ‘satanic people’, be suffering pelvic injuries that would cause them to go to this therapist? What credibility does the pelvic floor therapist have and what does she need protection from that she chooses to remain anonymous?

From this, Smith goes on to share his search for “the truth” and expresses his mistrust of mainstream news. He explains a small group of people that have influence over all of the mainstream media from news companies to entertainment brands, saying it “makes you feel like you have lots of choices, but you don’t.” This transitions from the influence of a small group of people controlling the media to the US government controlling the media with the introduction of Kevin Shipp, a former CIA counterintelligence agent and CIA whistleblower. Shipp discusses a series of older CIA studies conducted to see if motion pictures could be used to influence the audience from the 1940s. The documentary identifies links between the government and Hollywood and says the “CIA was and is in Hollywood and the CIA was and is contributing to Hollywood productions.”

Brad Martin, also involved in film production as a stuntman, is introduced as a friend of Smith notably says, “I know what’s going on right now actually has purpose and has a meaning, and there are consequences. Once the story is told on what’s happening in the world right now and all of the powers that be battling each other, it will be the greatest story ever told.” The way this statement is presented seems eye-opening at first, but there is no true meaning to this statement and spoiler alert, whatever the creators keep implying is happening behind the scenes is never revealed.

CIA operations including Operation Paperclip and MKUltra are discussed in depth – I encourage you to look further into both. However, these are only weakly related back to Hollywood through the movie Zoolander. While these operations are thought-provoking, they distract from the overall purpose of the documentary and weaken both their argument and their credibility because there are no meaningful connections to Hollywood.

After more discussion about the “elites” who control the media, an important question is raised: “What would happen if these media companies all had the same political ideology or agenda?” If this were true, why would the United States be such a divided country? If the government and the media had the power to influence the nation as the documentary implies, why are so many people focused more on the importance of supporting a political party than bettering the nation? If anything, I’d argue the media drives the country further apart, certainly not as an effect of the media companies having the same political ideology or agenda.

Liz Crokin is introduced as a journalist who the “media had declared her completely out of her mind” – in the words of Mike Smith. She describes her journalism career working for several different new companies. She says she was well respected in the industry until she began working on PizzaGate, commonly referred to by many outside sources as a false conspiracy theory accusing a Washington D.C pizzeria, Comet Ping Pong, as the center of a pedophilia ring involving Hillary Clinton that arose during the time of the 2016 presidential election. PizzaGate is closely related to the leaking of the John Podesta and Hillary Clinton emails. Crokin criticizes the media for manipulating PizzaGate into something that it wasn’t, but then Out of Shadows contradicts this claim by presenting clips from Ben Swann’s reality check segment on CBS News in which he challenges the information about PizzaGate and questions the integrity of the investigation. The clip of Swann is essentially exactly what Crokin said was not present in the media.

Discussion of PizzaGate leads to discussion about Jeffery Epstein, an incredibly wealthy man who ran a pedophilia ring for over 20 years. Epstein was closely related to many important people in Hollywood and politics; the documentary names a few: Prince Andrew, Naomi Campbell, Kevin Spacey, and Bill and Hillary Clinton. After being arrested in July 2019, Epstein died as a high-risk prisoner by an apparent suicide only a month later. Epstein’s sexual abuse ring was not a conspiracy unlike PizzaGate. Handfuls of survivors of Jeffery Epstein have come forward. Notably, the documentary does not mention President Donald Trump during the discussion of Epstein despite undeniable connections between Epstein and Trump.

Near the end of the documentary, Crokin says the bigger question is ‘who else is involved with Epstein?’ and says that’s what PizzaGate is. PizzaGate is a whole separate scandal from Epstein; just because they are similar, does not mean you can interchange the details of either.

Finally, after mention of the NXIVM cult, the documentary begins to identify Satanic ties in Hollywood. There is commentary about Lady Gaga’s break and Marina Abramovic, an artist that worked with Gaga during her break. Crokin explicitly says Abramovic is a practicing satanist, however, recently, Abramovic expressed in frustration to the New York Times, “I am an artist, not a Satanist.” The video accuses cannibalism and Satanic rituals from interpretations of artwork.

In these concluding moments of the documentary, both Kevin Shipp and Liz Crokin discuss connecting the dots to find the truth. If these figurative dots were meant to connect, wouldn’t the creators hold the truth? For what reason would they continue to hide it? I am one to question content constantly, hence my inspiration to look further into this documentary itself, so the whole 1 hour, 17 minutes, and 58 seconds felt like a lot of time for the whole consensus of the documentary to essentially be a cautionary tale inspiring the audience to search for the truth themselves.

During the conclusions from the four speakers, Mike Smith, Kevin Shipp, Liz Crokin, and Brad Martin, it’s obvious they are all on a different page. The tone of each speaker varies dramatically and it’s clear that they all share different takeaways from this project.

Although it’s not mentioned in the video, it’s important to note that the news companies Crokin worked with were right-leaning. Crokin explicitly identifies as a Trump supporter on her Instagram page. Shipp and Smith appear to be conservatively outspoken on their social media pages, as well. I could not find social media pages associated with Brad Martin. Additionally, if you go to the official website, the first thing you will notice is a cross. Shipp has recently criticized Roy Cooper, Governor of North Carolina, for being “anti-Christian” on Twitter. It may not be obvious from only watching the documentary, but with a little of outside research, it’s clear this documentary serves a conservative and Christian agenda.

Now not all of the documentary is false; there are many truths and important questions that are asked. However, if you are going to connect the dots as encouraged by the creators, you should be aware of the biases and misinformation, as the documentary is filled with imperfections.