How did Trump’s actions affect the way Pence had to debate?

An analysis of the vice presidential debate 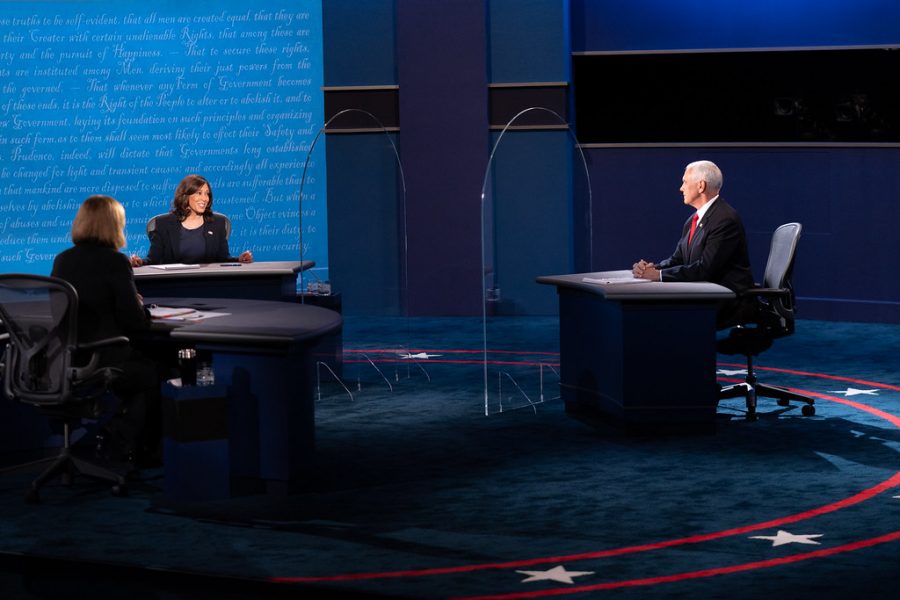 The discussion of who will become the next President of the United States officially began two weeks ago with the first Presidential debate broadcasted across the country. During the debate between President Trump and Democratic nominee Vice President Biden, both parties evidently clashed as they passionately argued over one other as moderator Chris Wallace attempted to direct the conversation without success. Then, three days after the debate, Trump released the information that he and the First Lady tested positive for covid-19. After this announcement, he was promptly helicoptered to Walter Reed Medical Center and spent the weekend there, receiving experimental treatment. Three days later, he was back at the White House and his first action was taking off his mask. All this occurred prior to the Vice Presidential debate and the American public got to see how Pence attempted to salvage the ticket.

The debate between Vice Presidential nominee Kamala Harris and current Vice President Mike Pence was much more civil than the Presidential debate. Pence aimed to clean up after the President and defend his response to the covid-19 pandemic as well as speak more about where he and Trump stood on policy issues. Because of Trump’s rash dismissal of the virus, Pence found a hard time defending his actions but was able to land a few punches on the Biden Harris ticket policies on taxes, fracking, and climate change issues.

Mr. Tiller, a government teacher at Oakton, shares that fracking is an issue he believes will help both the Republican and Democratic argument because fracking under the Trump administration has increased job creation and decreased gas prices and the United States is now exporting oil. Biden was originally opposed to fracking because of the environmental dilemma it causes, but now supports it because he needs it to win the support of swing states. On the topic of taxes, Mr. Tiller says that this is a good issue for the Trump ticket to argue because they have lowered taxes for everyone and have fostered a strong economy while Biden will raise taxes for those who earn over $400,000 and cut Trump policies which will inadvertently raise taxes for the American population. Finally, the topic of climate change is a clear victory for the Democrats. Trump left the Paris Accord, which is a blatant disregard of climate change issues. If Biden wins the Presidency, he has made it clear that he will rejoin the Paris Agreement.

Going back to the handling of the ongoing pandemic, Mr. Tiller says “anything that focuses attention on corona is good” for Biden because the Democrats believe that Trump’s response to the virus was weak and see it as something they can attack.

Overall, Pence has not changed much due to Trump’s actions, but has simply spotlighted issues Republicans believe Biden and Harris are weak in and present the Trump ticket’s advances in crucial vote issues such as the lowering of taxes and job creation. The country will have to wait and see what happens at the next and final Presidential debate.