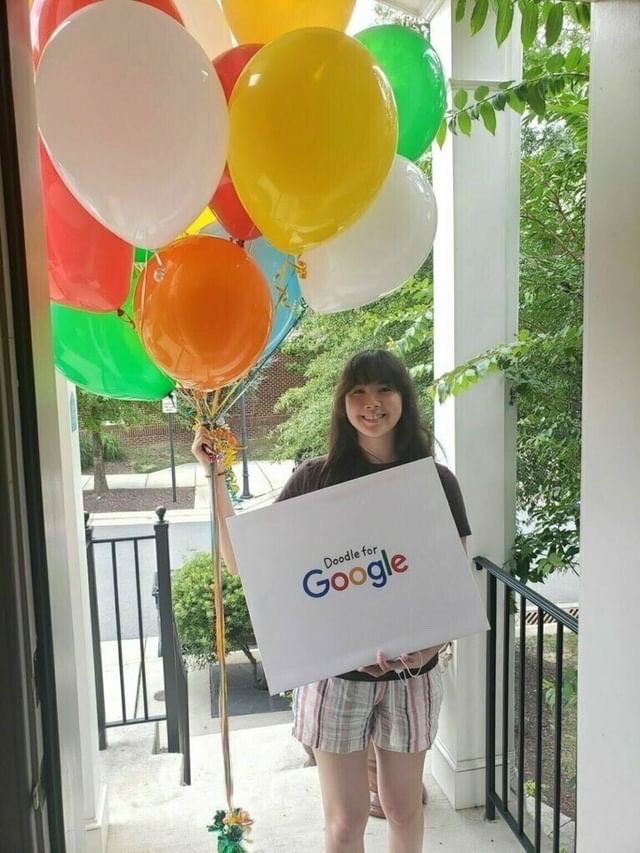 The Doodle for Google competition prompts students across the country to harness their creativity and artistic ability by designing an original google doodle based upon an important theme. The pool of contestants is huge; the prospect of earning recognition as well as perks such as scholarship money attracts many qualified individuals. Thus, Oakton student Sarah Naidich didn’t expect much when she submitted a creation to the Doodle for Google competition back in March.

“I worked on my google doodle on the day of the deadline, so my only thoughts were to enter my doodle in as quickly as possible,” Naidich explains. “I didn’t think much of what could happen after.”

Nonetheless, on a seemingly normal day in July, Naidich received some absolutely thrilling news. Her art had earned her the title of Virginia State Winner in the Doodle for Google contest, a prodigious and prestigious feat.

Pieces were evaluated on creativity, artistry, and communication of the year’s theme: kindness. Thus, Naidich’s piece was not only artistically superb, but also conveyed meaning.

Naidich explains the significance of her piece: “I knew I wanted to use a metaphor to illustrate kindness so I decided to draw a pipeline feeding water into a reservoir to symbolize how kindness is necessary for our world to thrive and retain its beauty,” she says. “In my doodle, [acts] of kindness produce water, which go into the reservoir, and sustain life on earth. I wanted to create this doodle to express the importance of kindness in strengthening the health of the environment, others, and ourselves.”

To celebrate her impressive creation and achievement, Naidich was given a box of prizes with balloons from Google. However, she couldn’t simply bask in all of the excitement: the Doodle for Google contest was still unfolding. With 54 state and territory winners, there would be a 5 day period during which a public vote would be conducted, resulting in 5 National finalists and a National winner. In preparation, Naidich had to market her piece through various platforms.

“I was overwhelmed with pressure to contact as many people as possible to vote for my doodle when I realized the amount of effort other contestants were putting in,” she explains. “My sister and my mother were a big help, contacting their friends, posting my doodle on social media, and my sister got me many interviews for tv and radio.”

Naidich reflects, “even if I didn’t win, I’m extremely grateful for my family supporting me throughout the voting process.”

The competition also held special significance for Naidich, who hopes to pursue art as a career and recognizes that there are a variety of artistic methods and interpretations. “My main medium is digital art, and I feel like it is often underlooked in large art competitions, so having a digital work of mine be nationally recognized makes me feel like the digital medium is being taken more seriously,” she explains. “I would love to work in illustration and concept art for the entertainment industry which utilizes digital tools, so being a Doodle for Google winner is a big step in achieving my goals.”