The Passing of Jose Fernandez

On Sept. 25,  Miami Marlins pitcher Jose Fernandez passed away tragically in a boating accident. Fernandez was an immigrant from Cuba, and he had tried to defect from Cuba three times until he and his mother finally made it on the fourth try. Last year, he became a U.S. citizen. Even Bryce Harper, the MLB’s most notable player, talks about how Fernandez was one of the leaders of the new wave of players. “He was young, energetic, and had a certain flair about his style of play,” said Harper.

Baseball has been under scrutiny recently for being a “tired” sport; Fernandez was the complete opposite. Fernandez had an unfiltered joy for the game; when he was out on the field, it was obvious that he truly loved the game. Harper also said, “Jose Fernandez would strike you out and stare you down as you walked to the dugout. But when you would homer and celebrate, he wouldn’t care because you had gotten the better of him.” Fernandez also was always spreading his positivity throughout interviews and with his teammates. Whether or not Fernandez was on or off the field, he was always laughing and smiling.

On the night of Sept. 26, the Miami Marlins played their first game since the passing of Fernandez. All of the players were wearing number 16 jerseys in honor of their lost teammate. As the players did their warm-ups, you could see the tears going down their faces. The leadoff batter for the Marlins was Dee Gordon. Gordon walked up to the plate with Fernandez’s helmet on and took the first pitch from the opposite batter’s box. He then switched back onto his preferred batting side. On that next pitch, Gordon hit a towering homerun to right field. As Gordon was rounding the bases, you could see the tears rolling down his face. The entire ballpark was on their feet as Gordon passed home plate. He immediately pointed up to the sky and broke down crying. At the end of the game, all the Marlins players came out to the mound and took off their hats, where they began to kneel down and pray. This game only shows a fraction of the effect that Fernandez had on the game. Since his passing, nearly every team has made a tribute to Fernandez. Many teams will write the number 16 on their hats, and other teams have hung up a Fernandez jersey in their dugout. Longtime Miami Marlins fan and Oakton junior Fred Hrinko shared his thoughts on the tragedy. “Not only was Jose’s passing a loss to our team, but it was a loss for the sport of baseball…. The Marlins had no shot of making the playoffs, but that didn’t stop Jose from pitching every game like it was game seven of the World Series.” Not only will Fernandez be missed by the Marlins Organization, but he will also be missed by the entire MLB. One of the hardest facts to process is that Fernandez had recently announced that his wife was pregnant. Fernandez’s passing is a true tragedy, and his attitude and love for the sport should never be forgotten 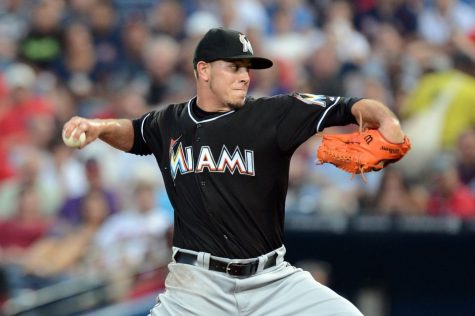