Last week, the District of Columbia was covered with the famous cherry pink flowers. This year marked the 106th anniversary of the cherry blossoms in DC. The National Cherry Blossom Festival said that the blossoms were in their peak from April 5-8, as predicted. Here’s everything you need to know about the blossoms. 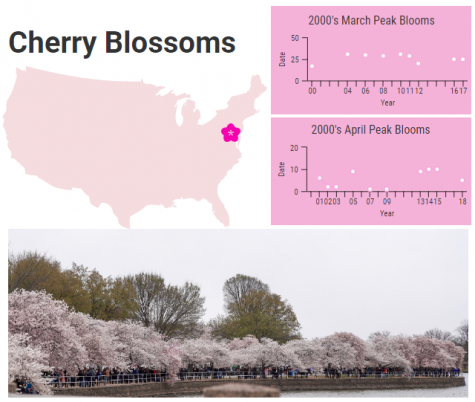 People from all across the country travel to the capitol every year to see these beautiful flowers. The National Cherry Blossom Festival Organization estimates that today about one and a half million people come to see the blossoms each year.

Since we live so close to DC, with very easy access to go out and see the cherry blossoms and everything else the District has to offer, many locals don’t understand the culture behind these trees. “Nothing like that happens in California,” said Sriya Gandikota(9), who used to live in California. “When we did move here, we went to DC to see the blossoms and we were in awe.”

Freshman, Anna Hougaard, has lived in Virginia for 6 years. She says that “we take it for granted,” living so close to the cherry blossom festival.

The Cherry Blossom Festival celebrates the gift of the trees from Japan in 1912. The first collection of trees were sent in 1910, but arrived diseased. In 1912, 3,000 healthy cherry blossom trees were successfully sent to the capitol by the mayor of Tokyo. The trees serve as a symbol of the relationship between the United States and Japan. Three years later, the United States returned the favor by sending dogwood trees to Japan.

You can see balloons, floats, bands, and other performers this Saturday, April 14th, in the National Cherry Blossom Festival Parade. The parade starts at 10 A.M. and will last for two hours. Grandstand seating costs $20, or you can stand along the route and watch for free.

For more information about the cherry blossoms trees or to purchase tickets for the parade, visit https://www.nationalcherryblossomfestival.org/.