At 2:00 A.M. EST on March 10, we all time traveled. Not actually, but we set our clocks forward seemingly traveling through time. What I’m referring to is daylight saving time(DST), which is everyone’s favorite day of the year in which the entire country essentially gets one hour of jet lag without the fun of traveling. While it has been a national standard since the 60’s, every year it seems to become more and more controversial.

First, to truly understand where all the controversy is coming from, it’s important to have some background. It’s a common misconception that it affects the amount of sunlight in a day, but it’s rather when we experience the sunlight. DST’s main goal is to save the most productive hours of the day for time when the sun will be out. Not only is it nice to have more time in the sun, but it actually has economic benefits and decreases criminal activity. People are more inclined to run to the store or participate in activities after the work day, and if the sun is out later people are more likely to do so; theoretically gently boosting the economy. Also, people are less likely to commit crimes like robberies if the sun is out later into the evening. Another contributing factor to its rising of a national standard was because it was considered to be a energy saving trick, especially during World War I. It was thought that having the sun set earlier in the evening would save electricity by having less time with lights on, but it has been proven that there is no notable change in energy conservation from daylight saving.

All of this seems good in theory, right? Of course, but daylight saving time doesn’t really accomplish everything we would like it to. With the current observation of daylight saving, the sun rises at a reasonable hour a little less than a majority of the days on average in America, but it’s pretty effective at setting at a reasonable hour most days in most places in a year.

Some states have tried to change the policy of daylight saving time. Arizona, in attempt to combat incredibly high temperatures during the day, and Hawaii and Alaska, due to different sun positioning, already don’t participate in daylight saving, but other states like Florida and California have proposed legislature to change the policy to keep DST in effect all year long. If it were in effect all the time, the sun would rise after 7:00 A.M. for most of America for most of the year, but it would have the sun set after 5:00 P.M. pretty much everyday in participating regions in the country, ultimately accomplishing the goal of having more productive hours in the sun later in the day.

You may be wondering why they wouldn’t just stop daylight saving all together. Although, abolishing it would increase the amount of days the sun sets and rises at a reasonable hour across the country from the current policy, it wouldn’t fully maximize the productive hours as much as keeping it in effect all year long.

In addition to productivity, there are some minor concerns with safety. Practically losing an hour of sleep throws off everyone’s biological clocks, which makes everybody a little bit off for the first few days after the change. Studies from John Hopkins University and Stanford University have found that there is a minor, but noteworthy, increase in car accidents, heart attacks, and other injuries the Monday after the time change.

Due to all of the above and just the inconvenience of losing an hour of sleep, some people have began begging lawmakers to change the DST policy. On March 11, the first Monday after the 2019 time change, President Trump tweeted, “Making Daylight Saving Time permanent is O.K. with me!” It was overwhelmingly supported on Twitter(quite surprisingly as Trump’s tweets usually spark mass chaos on the internet). Recently several states have pushed for legislature to make DST year round. 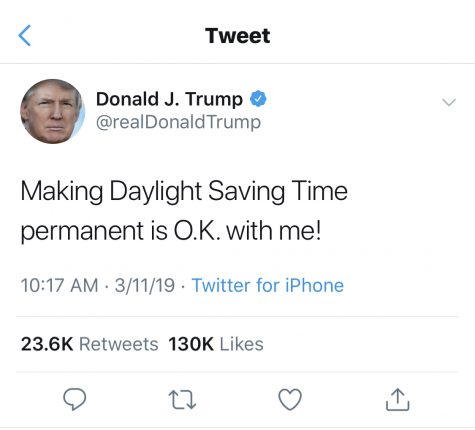 When asking Oakton students for their opinions, many were on the same page; it has a good concept, but could use some revisions. Carlyn Switzer(9) thinks, “It’s kind of stupid but can be useful.” While Kelsey Washlack(10) believes we should have “longer daylight all year.”

It’s not certain what the future of daylight saving will hold for America, but it is interesting to see how can hour of lost sleep can influence politics. And, don’t forget to get caught up on your missed sleep; today, March 11, is National Napping Day, after all.